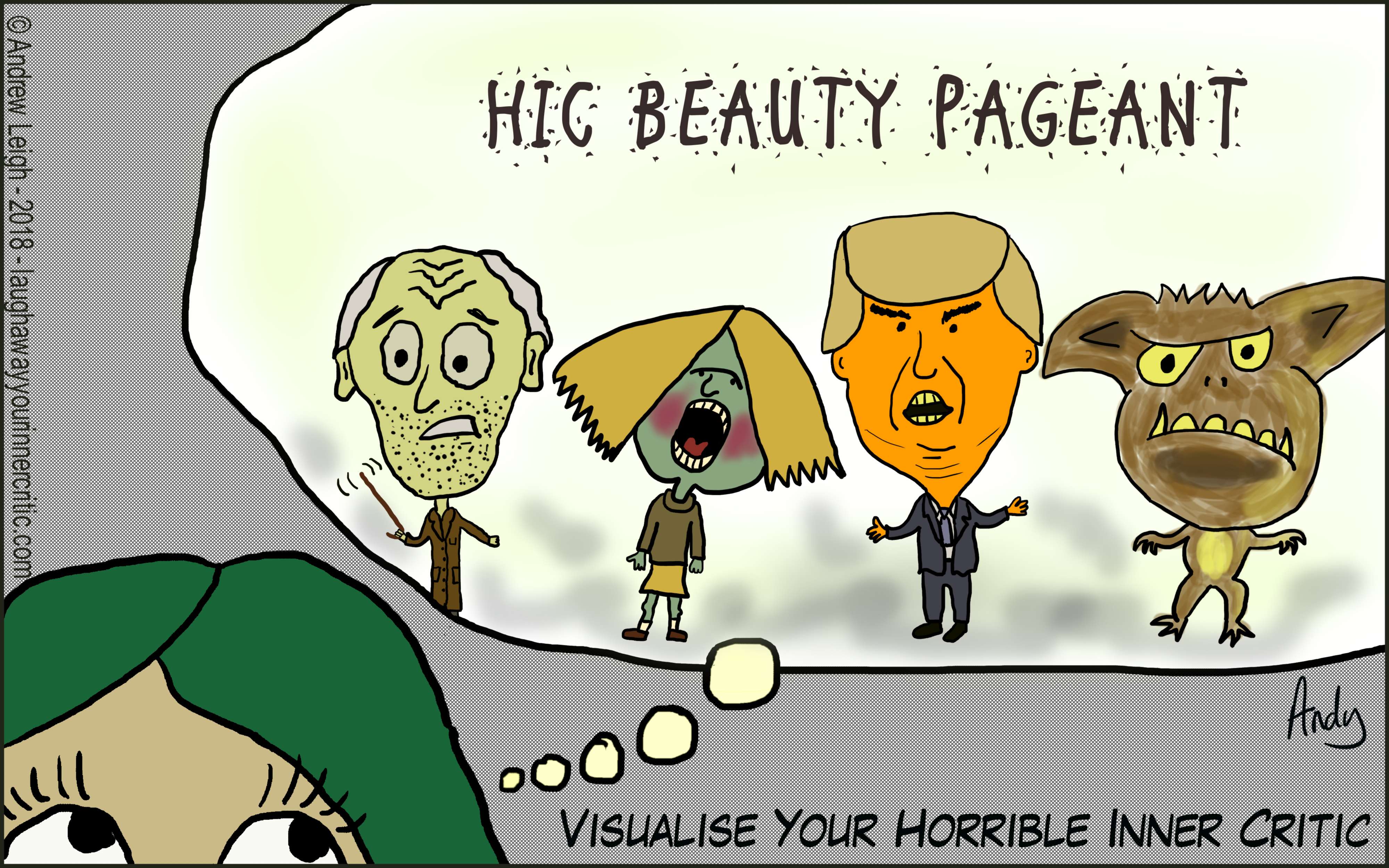 We’re doing this because it can be much easier to boss our negative thinking if we:

When I’m working with coaching clients I’ll often guide them through the visualization process, taking care not to lead them towards any particular visualization. After all, I want them to find their own individual Horrible Inner Critic, not some off-the-shelf version that won’t be as personal or as useful. I’ll encourage them not to actively imagine their HIC, but rather to allow their inner-eye to have a look around and simply see what’s there.

Because I don’t know each reader’s situation I’ve chosen not to offer a simple set of guiding questions for you to do the same. Instead I’ll describe the process and the outcomes I’ve experienced with my clients. If you want to follow along it must be at your own risk, and please don’t try this if you may have depression, chronic anxiety or any mental disorder.

Okay then, here’s how it goes. Remember, don’t try to imagine, just follow your intuition and feelings and allow your ‘inner eye’ to show you what’s there.

Visualization of the Horrible Inner Critic

Question to clients – How does your negative thoughts voice differ from your own?

This is an important question – not just as first step in the visualisation, but also in raising awareness and consolidating the notion of difference between you and your Horrible Inner Critic.

Answers – Differences can be subtle or more marked. A few people can’t detect a difference, and that’s okay. Others with a more auditory imagination recognise clear characteristics of their HIC voice.

You – What does your own HIC voice sound like? How is it different from your more positive voice?

Question to clients – Where do you ‘sense’ your Horrible Inner Critic Voice to be coming from? Where is its source? We’re after a physical place here.

This may be somewhere in your body, or less frequently outside, on a shoulder for instance, or by your ear.  Usually though, people feel the source of their negative voice to be coming from somewhere in their head (if so I’ll ask them to say where in their head), or in the chest or stomach. So far no-one has told me their HIC voice lives in a leg, but I guess there’s a first time for everything!

You – where’s the source of your HIC voice?

Okay, so now we have a ‘geographical’ source for the HIC voice, it’s time to go and take a look around.

Here I ask my clients to close their eyes and allow their mind’s-eye to drift to wherever they sense the source of their inner critic voice to be.

When they get there, it’s usually (but definitely not always) gloomy, cool and damp. This might be quite different for people living in a different climate to the UK. There may be a cave or some kind of broken-down cabin, but again, it could be anything.

At this point, many people can see their Horrible Inner Critic, while for others it’s too gloomy to see much of anything.

You – let your mind’s eye float to wherever you feel your Inner Critic voice is coming from. Take a moment to register the surroundings. Maybe you can see your HIC, maybe not. If not, don’t worry – a solution is at hand.

When it’s too murky to see, I ask the person (in their mind’s eye) to look down and see the super-powerful torch that’s on the floor by their side. They pick it up and shine it around. Usually their HIC will then be there for them to see.

Now I’ll ask what my client is seeing. What is their newly discovered Horrible Inner Critic like? There’s often a tone of incredulity at this point – at the ridiculousness of the image they’ve discovered. We’re having fun now. It’s hard not to laugh, so we’ll share a laugh at what our imagination has conjured up – but only if it’s appropriate and being led by the client.

A Kaleidoscope of Inner Critics

So, what are people’s Horrible Inner Critics like? Well… the first thing to say is that there is no normal – apart from its size, which is almost always quite small or smallish, and its demeanour which tends to be unthreatening and rather unhappy at being discovered.

Here’s what you might find, based on my experiences with clients:

Whatever turns up, we’re keeping things light Remember that we’re simply observing. We’re not trying to actively construct images. Instead we are acting as witness to what turns up (which I guess, is part of the fun). We are seeing what we find, checking out the details – the clothing (or lack), facial features and mood, shoes, hair, sounds and smells.

After naming our Horrible Inner Critic, we can continue the personification process by visualizing it – starting by:

That’s all for now. Next up we can have a bit of fun with our HIC and significantly weaken the power of its negativity.

As ever, your comments are most welcome.