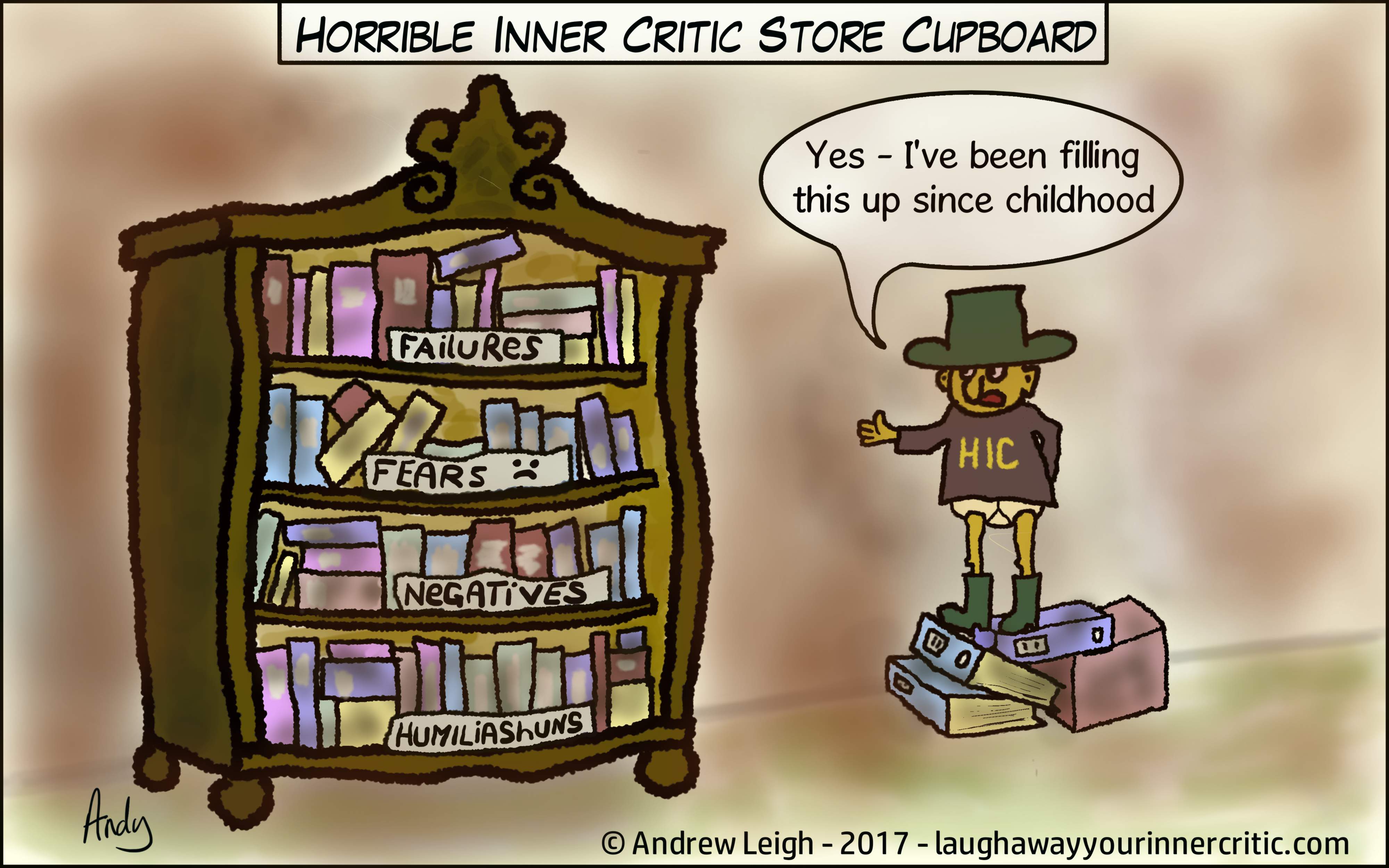 How does our negative voice – our Horrible Inner Critic  – develop? Here are two theories. I think they’re both right.

Theory One – Stone Age and Before

Well, back in the day – that is – lots of millions of days back, in the time of our cave dwelling ancestors – back then, not only did we spend a lot of time looking for food, we also had to make sure we didn’t become food. We were hunter-gatherers who had to take care not to become hunted and gathered.

In those pre-historic days we needed a voice that made us careful and cautious. Those that weren’t didn’t last long. You know what? We still need that voice – though hopefully not so much and not so often. Then and now that voice can stop us taking risks that might get us hurt. Don’t swim with those innocent looking hippos, it might tell us, and keep clear of that gentle, grass-munching woolly rhino too.

Move forward several millennia and now that voice may be reminding us that It’s sensible not to override the safety switch on that circular saw – ouch! – no problem, still plenty of fingers left… and definitely do not believe this email telling you, Dear Customer, that your online banking is blocked and… oh yes… please click on this link to re-enter all your security details, thank you very much.

Our inner critic might seem horrible now, but it started off nice… sort of. Some psychologists argue that it begins as a protective voice, a balance to our childhood impulsiveness. It’s a voice that helps us learn the lessons of past mistakes and warn us of perceived danger. At these early stages it might be there to save us from the hazards of a busy road, keep us from upsetting the school bully or being too cheeky to mum or dad.

Of course, I’m not saying we always listened to its warnings. In fact, as children we all too often ignore this protective voice… which may be why it learns all sorts of sneaky tricks to become more persuasive. [Note. For anyone interested in such things, having once been an English teacher, I was surprised to find that our Horrible Inner Critics intuitively use many techniques in common with the persuasive art of rhetoric, first codified by the Ancient Greeks and much loved and abused by politicians ever since.]

And I guess that clever persuasiveness is where our Horrible Inner Critic problems begin – though most definitely not where they end.

In brief, our inner critic protects us by stopping us doing risky things – and it stops us mainly by persuasion. Feelings of fear and danger are also often a factor  – but these feelings are generated by underlying expectations of failure, humiliation, potential loss and hurt.

But how does our Horrible Inner Critic judge when to protect us and what to protect us from? The answer is simply that it collects evidence. You might think at this point, that if it only focusses on real physical threats, then what’s the problem? The problem is that it tries to protect us from psychological hurt too – from the disappointment of failure, the humiliation of defeat, and the shame of judgement from those we respect and love.

This protective voice collects evidence and over time takes on all sorts of stuff, including:

No surprise then, that in the process of trying to protect us from hurt, a negative voice often builds up a profoundly negative and one-sided picture of you and your capabilities.

And in the warped logic of negative thinking our Horrible Inner Critic can build a ridiculous set of overblown consequences to even the most trivial potential mistakes and failures.

How so? Because staying put, risking nothing, feels like the option of least potential hurt: failure is disappointing, so better not try; people might laugh at me so… better not try; success (yes, really), success might show I can’t cope so…better not try.

When it boils down to it, almost all of what our negative thinking aims to do is to stop us. It’s our Inner Critic’s main goal – stop me from hurting myself. But, to return to where our Horrible Inner Critic began – its efforts are built upon a profoundly negative understanding of who we are and what we are capable of.

As mentioned above, this part of us was formed by taking on board negative experiences, negative messages from others and even the negative cultural views of society about our own gender, ethnicity or class. It doesn’t have the capacity to recognise our abilities and our genuine potential.

As a result, your Horrible Inner Critic does not believe in you. It does not believe in your ability to grow and succeed. And even if it’s motive is to protect you from hurt, it will often try to do so by persuading you that its own negative, one-dimensional view of who you are is the whole story. We’ll look at how it does that in a future post.

It’s what happens when we take our negative thinking too seriously, when we allow our Inner Critic’s voice to swamp the better part of who we are.

Well cobblers to that!

Because you do know there is a better part of who you are – a more positive, more powerful self. It may not feel big or powerful right now, but you wouldn’t bother looking for solutions if your positive self didn’t exist. You certainly wouldn’t be on this website.

We do have a Horrible Inner Critic, and yes, it is also a part of who we are. But we are so much more than the poor thing believes – and we are not going to be scared of it any longer.

← Don't Beat Yourself Up Visualize your Horrible Inner Critic - Part 1 →