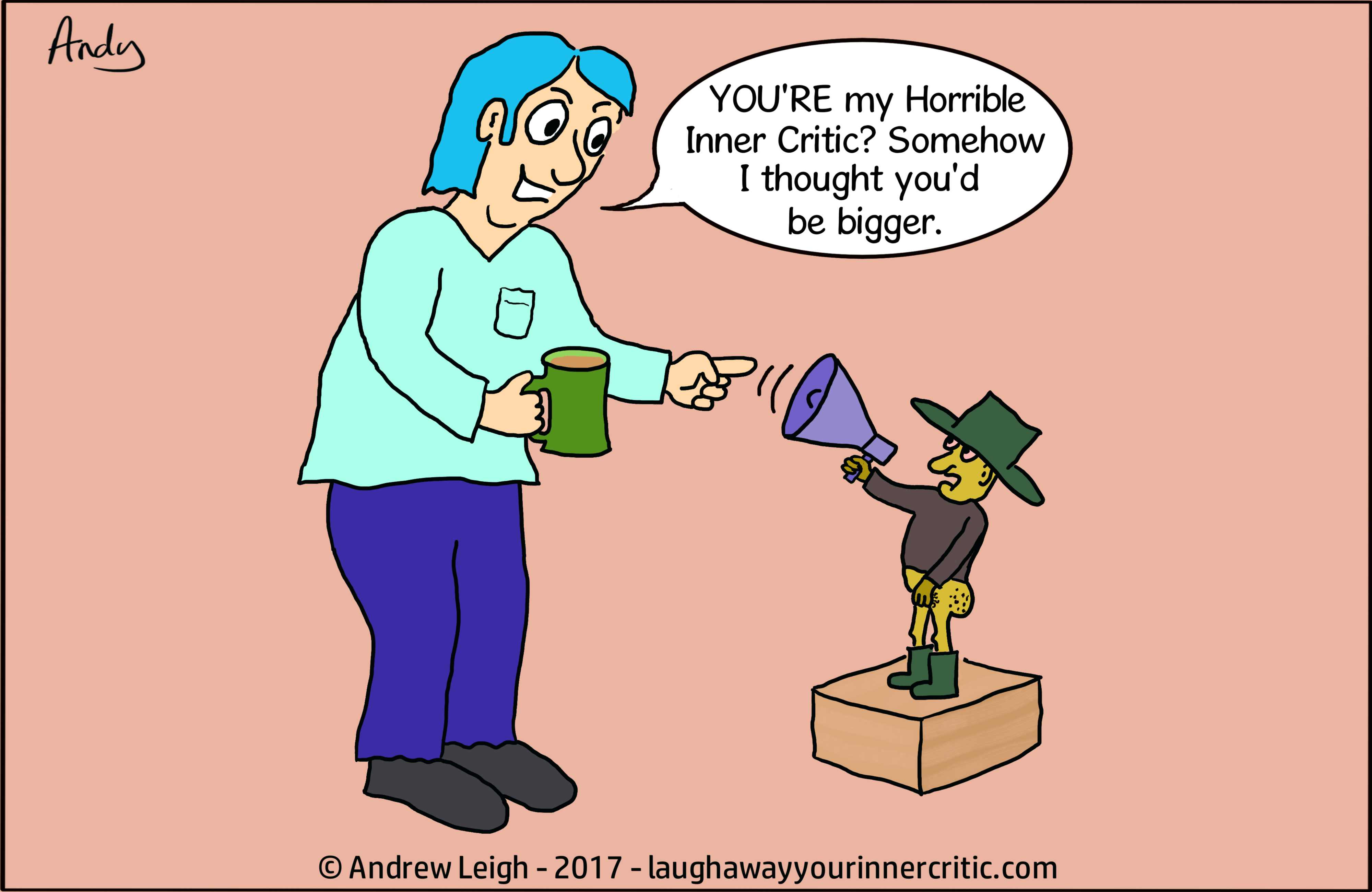 You’ve probably already spotted that Laugh Away Your Horrible Inner Critic is all about not taking your negative thinking too seriously.

And yet, chronic negative thinking and its consequences can be awful to experience and endure. You know what I’m talking about – the self-doubt, the beating-yourself-up, decision paralysis, self-sabotage, the disappointment of not achieving all the good stuff the more positive part of yourself knows you are capable of…

With all that going on, I can urge you to laugh away your negative thinking until cats go moo – but it really isn’t going to help.

One challenge that’s tough to crack is this: we often think of our negativity as being who we are – it’s part of our nature, one of the things that defines us as a person – it’s just us!

If we take that as the truth, then we have to take our negativity as self-inflicted –  it’s our own damn fault – and if we want to fight it we have to fight ourselves and change the core of who we believe we are. How the heck do you do that? And even if you could, would you really want to?

Well, I hope not. It’s too hard, too heavy – and all too often will just make things worse.

Just as well then, that there are better, easier and more effective ways of quietening your negative thinking. Let’s shift your idea of where that crappy thinking comes from. Let’s move it from the ‘centre’ of you to somewhere more at the edge. You may already be fortunate enough to feel your negativity comes from some other part of you – however, many do not. And if your negativity is dominant it may feel a bit of a struggle right now to see how this could possibly work.

Trust me, this is a tried and tested approach that’s been used successfully across personal development for many years. As ever though, if you have or suspect you have a mental disorder this may not be right for you so please seek appropriate advice.

We’ll begin with the very simple step of labelling the source of our negative thinking – so, say a big hello to your Horrible Inner Critic.

Horrible Inner Critic is the name I use to help begin the process of personifying the source of your negative thoughts. The term inner critic has been around a long time. I chose the tag horrible because although horrible is a negative word, it’s one that many of us don’t take too seriously. For some reason it has comic overtones, something harnessed by the Horrible Histories series of books and TV shows in the UK and the Horrible Harry books in the US. Both are aimed at children – underlining, I believe, the safeness of the word.

So: horrible: it’s not nice; it’s not positive, but, you know, it ain’t that bad either. It’s a word that wants to be associated with its tough buddies – horrific and horrifying, but it can’t quite cut it because it ends in ible. And ible sounds a bit, well… funny. Ible, ible, ible. Say it out loud – go on give it a try.

But what the heck is a Horrible Inner Critic? Where does it come from? Why have we got one? Do we need one? Be patient, we’ll get to these and other questions in future posts.

For now, just get used to the idea that we have our very own internal ‘friend’ that constantly undermines us with negative, fearful and sometimes downright cruel thoughts. I’ll describe shortly how despite all that, our Horrible Inner Critic has our welfare at its heart. Why much of what it does can even be seen as misguided attempts to protect us from hurt!

We’ve already got a generic name: Horrible Inner Critic, which a lot of people stick with, and we can shorten that to its initial letters – HIC. But to really personalise your HIC, give it a name of its own. Ideally you want a name that amuses you while possibly slightly annoying your Horrible Inner Critic. It’s very important to choose a name without much venom or nastiness in it. Your HIC may be causing you a fair bit of bother right now, but that shouldn’t be reflected in your name for it. That would be treating your negative thoughts too seriously – and when we do that we gift power to it.

For a long time, my own HIC was called Alphonse. I don’t know why and apologies to anyone called Alphonse who’s reading this. I just find the name amusing. The good news for the world’s Alphonses is that my Alphonse morphed into a comic version of Napoleon Bonaparte who I now call Nappy. For those who don’t know, a nappy in the UK is a diaper in the US.

How to Name Your Horrible Inner Critic

You can go for

Consciously choose a name for your Horrible Inner Critic, or alternatively, just leave the idea in your head for a while and allow a name to bubble up from your subconscious.

I’ll say more about this in a later post, but if you have a visual imagination you may already be forming a picture of your Horrible Inner Critic. You’ll see in the cartoon above just how small I’ve drawn the HIC – that reflects my own experience and the same goes for the many, many clients I’ve worked with. Your HIC isn’t big and once we’ve learned how to laugh it away, it isn’t powerful either.

Our negativity can feel like it’s ‘just who we are’

Giving your HIC an amusing name helps in taking away the power of your negative thoughts.

That’s all for now. I’d love to hear your names for your Horrible Inner Critics, and it will help others to come up with names, so please share in the comments.

** Shit-face is the name of my wife Lynda’s Horrible Inner Critic (used here with her permission). It’s probable a little more abusive than I’d recommend but it works for her.  😊